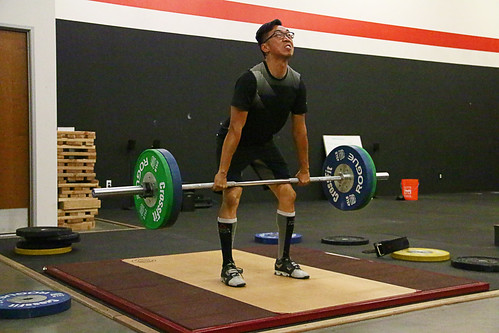 BAR REVIEW (Getting Ready for the Bar Exam)

In the world of functional fitness, and in regular lifting gyms everywhere, the barbell takes a lot of abuse. For a piece of equipment that is so central to the mission of strength building, and general fitness, it gets so little respect that it would not surprise me if a barbell stood up and smacked the bejeezus out of you after getting thrown unloaded to the ground. “Hey, Sandow!” *SMACK*

What is more shocking, however, is how little so many lifters — and coaches — know about the barbell. What distinguishes an Olympic-lifting bar from a power-lifting bar? What’s with the “women’s” bar versus the “men’s” bar? Why are some bars $45.00 and some $2,000.00 (and why would anyone buy such an expensive bar)? What is the purpose of knurling, why do some bars have center knurling, why do some bars have knurling markers, and why do some bars have double knurling markers? Why are you calling me (yes, you) careless for leaving chalk all over the bar or, worse, chalking the bar instead of your hands? Who gives a flying freak-out anyway, since you just hit a PR snatch without knowing the answers to ANY of these questions?

Just because you don’t know “why” doesn’t mean you shouldn’t know. And sometimes (a.k.a. all the time) knowing “why” will help you improve and will save you money and heartache down the road. With that being said, sit tight and learn about that precious piece of equipment with which you show the world that you are a badass. In fact, I’m going to improve your next one-rep max by at least TEN POUNDS with some simple information that no one bothered to tell you.

KNURLING: this refers to portions of the shaft that have tightly machine-etched criss-cross patterns, generally where you grip the shaft. The purpose of knurling is to increase grip by providing micro channels that dig into the hand and which, to a small degree, allow moisture to wick away. The knurling markers are popular grip width indicators. Center-knurling is an anachronism that goes back to the days when people performed one-handed lifts with the barbell, though some people use it to obtain “neck-grip” during a back squat.

CHALK: is not part of the barbell, but careless people act as if it is. There is nothing cool about leaving chalk on a barbell: chalk serves one purpose, which is to absorb moisture and allow for a better grip. Barbells are generally made of steel. Steel is an alloy (i.e., a combination of other metals and chemical compounds) designed to be far stronger than any of the constituent pure metals. Steel consists primarily of iron and carbon. Iron rusts (i.e., it oxidizes). So when chalk absorbs moisture from your hands, where does that moisture go? It stays in the chalk, which you left on the bar, which also absorbs moisture from the air, all which penetrates the protective coatings on barbells at different rates, causing rust and deterioration of the barbell. Ever wonder why chrome-plated barbells flake? Rust beneath the chrome-plating simply separates the chrome from the steel. The same is true of stainless steel (though it takes longer) and zinc oxide coatings. Wipe the chalk off with a brush or cloth when done!

Review: the barbell consists of a shaft and sleeves, it is moderately heavy, and chalk absorbs moisture and makes it rust, so you should brush off chalk after every use. That wasn’t hard now, was it?