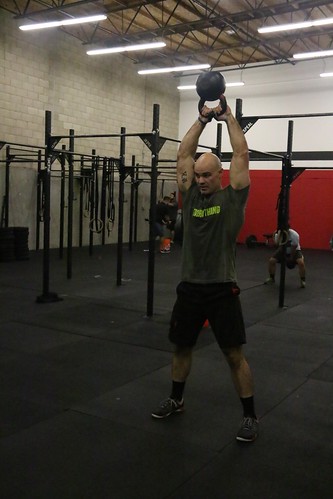 By now, most of you have heard “The Chalk Talk,” but for those who have not …

Once upon a time in Chalkland, there lived a totally yoked Knight named Nitsud, who used to beast-out WODs like nobody’s business. One day, Nitsud saw a brown dusty substance on his hands and noticed that the barbells didn’t “grip” as well as they used to. He set out on his prowler and searched the land for the totally yoked troll known as Esoom, who was old as the hills, so maybe he might know something about this strange brown dust that made the barbells loose their “grip.” Nitsum found the old troll knocking out a boatload of muscle-ups and heavy deadlifts under the bridge and asked about the strange brown dust.

“That is called ‘RUST,’ oh noble knight, and it represents the steady deterioration of the microtips of the knurling on your barbell. This happens when people leave chalk on the bars.”

“You see, chalk absorbs moisture 24 hours a day; we use it to diminish moisture on our hands when we lift (heavy and hard, God willing). But chalk cannot help itself, and it continues to absorb moisture long after we are done with it, even drawing moisture from the air.”

“But Esoom,” chuckled Nitsud, “Wouldn’t that just make the bars clean, like they are getting a constant bath?”

“Bah!” said Esoom. “A bath of evil! You see, moisture wicks down into the fine crevices of the knurling and seeps through the steel and whatever coating is on the bar (because steel and coatings are porous). It then interacts with the iron in the metal alloy and forms RUST, which eats away mostly at the tips of the knurling, making the knurling smooth and useless.”

At this Nitsud leapt to his feet and drew his sword. “I shall slay whomever has put this accursed chalk on the bars!”

“Slow yo roll, young padawan,” said Esoom. “Damned near everyone does it, because it helps to maintain grip. The trick is to take it off the bars when you are done (and occasionally to oil the bars a tiny bit with some 3-in-1 oil). It’s no biggie for pull-up bars: they are smooth, so the moisture mostly just rolls off as micro-condensate and drifts back into the air.”

“From this day forth, Esoom, I shall instruct all whom I see TO WIPE THE CHALK OFF THE BARS WITH A WET-WIPE AND THEN TO DRY IT WITH A PAPER TOWEL IF YOU USE CHALK ON IT.”

“Coo-dat, noble knight, now let let me get back to getting my swole on.”

And with that, Nitsud bid the totally yoked troll farewell and rode off into the sunset (even though there was no mention of a horse earlier; oops, my bad, he rode off on his prowler).