WHY I LOVE MY SPORT

Do you ever reminisce on those days at the globo gym?? Sometimes I like to look back at all the memories of guys doing curls in the squat rack, 5 people standing around a bench with no one using it, or even the huge gathering waiting around for 6 o’clock ZUMBA class. That was before CrossFit. We just didn’t know any better. This email of forwarded from one of our members Cody and it is just too good to not post on the blog.. Enjoy this comedy and remember Why CrossFit is so damn Awesome.

Where everybody knows your name 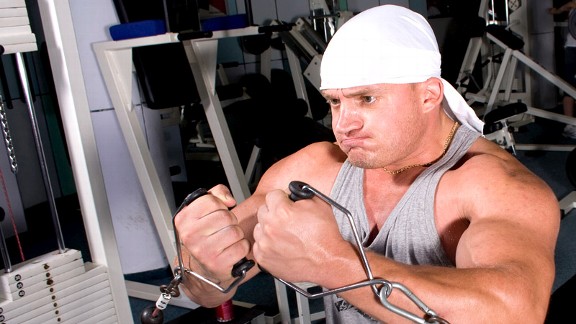 Heading to the gym? Be sure to celebrate Chest, Arms and Neck Day with this guy.

Grunting Too Much Weight Dropper Dude. He’s rocking the Zubaz pants, Guns N’ Roses T-shirt, Harley doo rag, weight belt and grip gloves. He comes in every day for two hours without fail because it’s Chest, Arms and Neck Day, which he executes with barbells that he drops from four feet for full head-turning effect. He looks like Conan the Barbarian on top and Conan O’Brien below because every day is Chest, Arms and Neck Day.

1986 Man. He’s the one with the Walkman, headphones the size of 25-pound plates, Richard Simmons shorts and the Tom Selleck ‘stache. He spends most of his hour warming up with various yoga poses in the corner, affording you views you never hoped to see. If you checked, he’d be listening to Phil Collins.

Unlimited Minutes Gal. She’s the one on the treadmill walking 1.3 miles per hour while watching “Judge Judy.” Her makeup never runs and her brow never moistens as she says on her endless cell phone call, “Yeah, I’m like working out, you know? Yeah, like five times a week! Like, what are YOU, like, doing?” After an hour, she bounces home and jumps on the scale, crestfallen to see she still hasn’t lost any weight.

Gallon Jug of Water Guy. He takes it with him to every station he goes to, along with his beach towel and remarkable hair shirt. He sweats like a priest in a bordello, leaving small ponds of goop on every bench. Sadly, the towel is applied only to himself.

Double-Parked Guy. He’s the ripped dude who’s always asking you, “Mind if I work in?” while tapping his foot as you finish your measly 90-pound lat pulldowns. He’s built himself a 10-stop circuit in his mind and allows himself only eight seconds between each station, and you have the nerve to get in the middle of it here at the 24 Hour Fitness he seems to own. You’re seriously harshing his endorphin buzz.

Barbie Ball Babe. She’s the one with the teased ponytail, bedazzled headband and enough makeup to stump an archeologist. She’s got page 6 of the Lululemon catalogue on, with matching sports water bottle, leg warmers, tight spandex pants and shiny sneakers that go with her colorful wrist sweatbands. Except the sweatbands aren’t needed, since she never actually works out. Instead, she just sits on the exercise ball you were actually trying to use talking to her friends on the elliptical who were hoping to actually work out.

Unnecessarily Nude Chatty Guy. He’s the guy in the locker room who suddenly wants to talk to you about the Vikings buck naked and propping one foot on the bench you’re trying to get dressed on. What’s most distressing — as you try to focus on the wall thermostat — is that he has a perfectly good towel in his right hand. All you can think of is prunes.

Sunday New York Times Woman. This is the gal on the recumbent bike in her khakis, black socks and dress shoes who’s pedaling in Super SloMo while reading every section of the New York Times as though they contain a new chapter of the Bible. Her knowledge level of the Syrian civil war is sky high, as is her cholesterol. There’s no point in hoping she’ll get off soon, since she’s got an untouched Sunday Washington Post on the floor next to her.

Tour de France Lance. He’s the dude in your spin class wearing bike shorts, click-in shoes and a yellow Bimbo jersey, with two water bottles in the back pockets, absolutely killing it. You’re thinking, “Why isn’t this guy racing in the Giro d’Italia this week?” until you realize he hasn’t once touched the tension knob.

Orbiting Satellite Guy. This is the older, portly gentleman who walks in wearing polyester slacks, a white undershirt, a belt that fastens just south of his clavicle and blindingly white New Balance running shoes. He makes one loop around the gym, looking at all the equipment, sighs once and walks out. Another New Year’s resolution dashed on the rocks of reality.

On the Way to Work Stripper. She has just 20 minutes to get in some sit-ups and power lunges before her shift at Cheerleaders. These are also the 20 minutes when more cumulative weight gets lifted by males than the rest of the day combined. It’s no use, of course. Her boyfriend is Grunting Too Much Weight Dropper Dude.

Annoying Twitter Guy. This is the 50-something guy who tweets every 10 minutes during his one-hour workout, thinks of a column idea, asks his 11 Twitter followers for help and then neither thanks nor credits them.

WORKOUT OF THE DAY 28AUGUST12

*3 Wall Walks between each set*

100m Run between each set